Fed Up With The Mess That Happens Due To Trick-Or-Treaters Every Year, Rich Parent ‘Ruins’ Halloween For Thousands Of Kids

It’s all fun and games until somebody gets hurt. Halloween might be one of the most festive holidays of the year, but it doesn’t give people the right to do whatever they want. And parents should still be making sure that their kids know to trick or treat in peace, without leaving a massive mess behind. Alas! Real-life is often confusing and chaotic.

A redditor living in a rich neighborhood told the tale of how they ‘ruined’ Halloween for thousands of kids. They asked the AITA community on Reddit for their verdict on whether they were being a total jerk or not because they didn’t feel any remorse. Their sister, however, was livid.

We don’t want to spoil the full story for you just yet, so go on and read the full tale below, dear Pandas. When you’re done, we’d love to hear your thoughts about the situation: do you think the parent was wrong to ask the police for help to restrict who can come into the neighborhood or were things truly getting out of hand?

Halloween is a lot of fun, but hundreds upon hundreds of trick-or-treaters can cause some problems for the locals 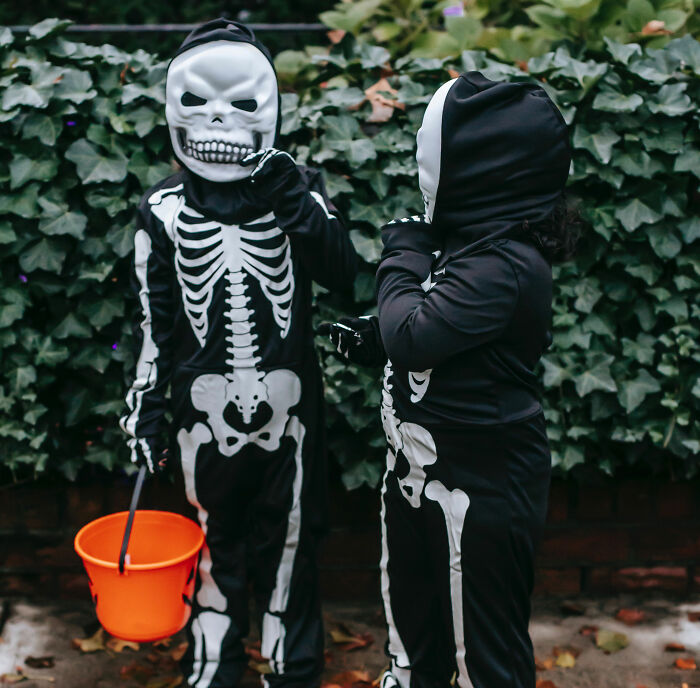 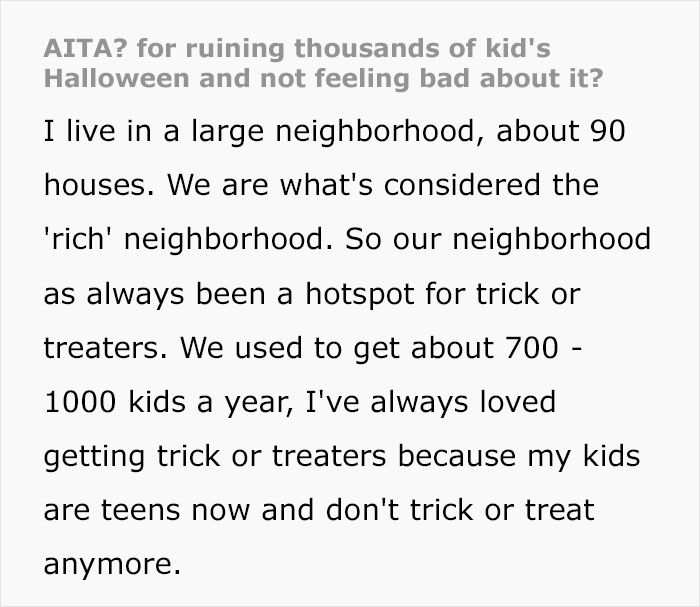 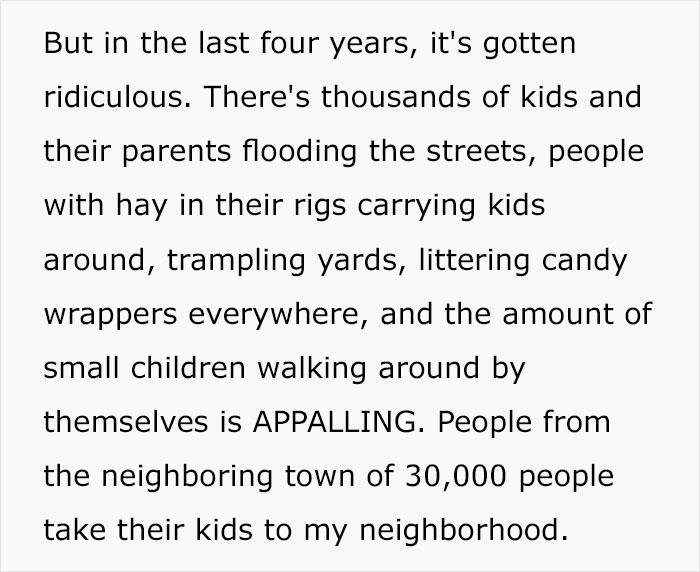 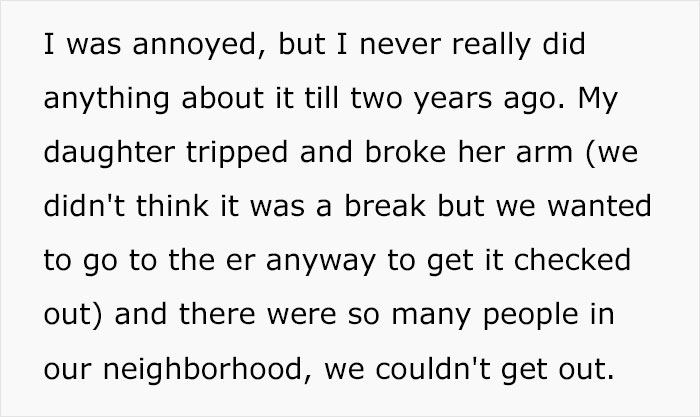 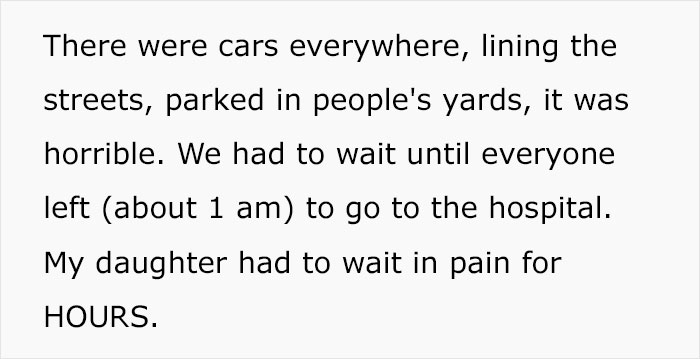 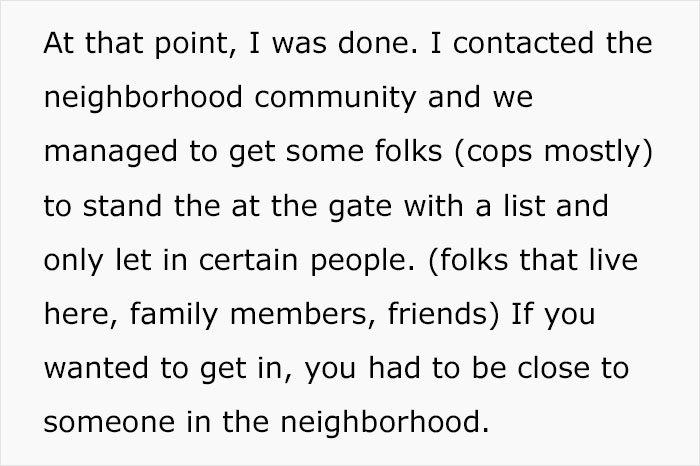 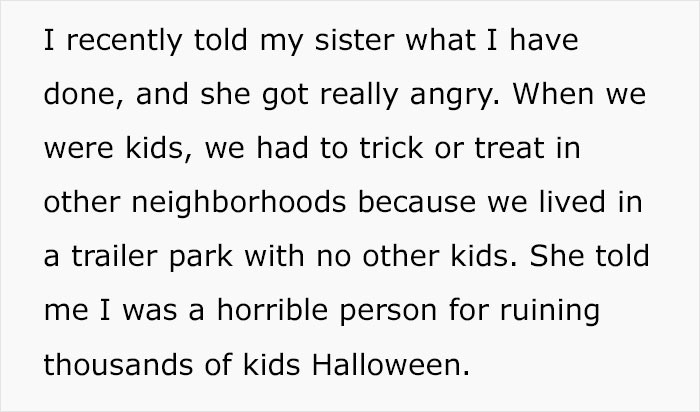 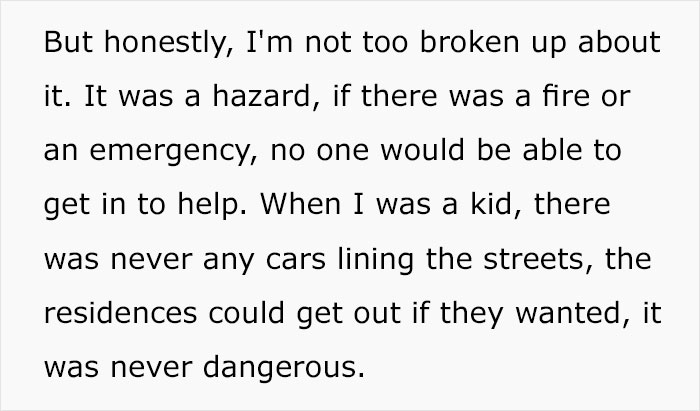 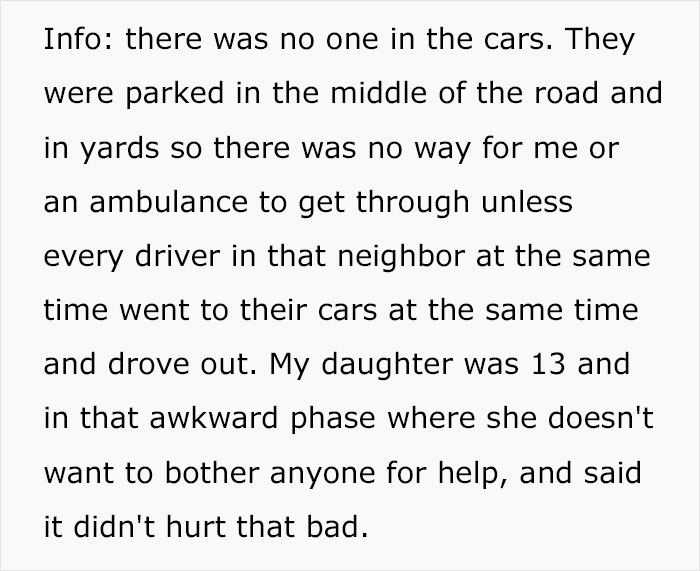 I’d imagine that any good parent would be absolutely livid that they can’t take their child to the hospital when they’re in pain. That’s exactly what happened to the redditor whose daughter broke her arm. Unfortunately, due to all the cars parked haphazardly by out-of-neighborhood folks, the redditor had to wait hours to get their teen daughter to the ER.

The parent was done with the endless droves of trick-or-treaters leaving behind candy wrappers and causing chaos. They got some locals, mainly police officers, to stand at the gate and restrict who can actually come into the neighborhood to celebrate Halloween. In short, if you wanted to trick-or-treat in the neighborhood, you had to be close to someone who actually lives there.

However, the redditor’s sister got extremely mad at them for putting an end to trick-or-treating for so many kids. She reminded them about how they had to go trick-or-treating in other neighborhoods because they lived in a trailer park when they were kids themselves.

The vast majority of AITA community members thought that the author of the post did nothing wrong. Or, as one user put it, “People still need to behave. The kids can still have fun. Parents just have to actually parent them now because someone else is watching.” However, there were plenty of other, more critical opinions about what happened.

One of the most important things for ghouls, ghosts, and goblins to remember on Halloween is to be polite at all times. It might sound simple and obvious, but a warm ‘thank you!’ shows your neighbors that you care. Meanwhile, avoid stomping all over the lawn to get to the door: use the path, it’s what it’s there for. You’re not here just for the candy—you’re here to be a good, respectable neighbor, too.

CNN warns that trick-or-treaters should do their best to keep their greed in check. “If someone has left a bowl of candy on their doorstep, be nice and take only one or two pieces so other kids will have some to find. And if you’re ever offered candy you don’t like, take some anyway. You can always sell it—yes, for money!—to a buyback program for a good cause,” Melissa Gray writes.

Something else you should keep in mind is how your costume will affect the locals in your area. For instance, if you know for a fact that there will be lots and lots of small children around, you probably shouldn’t put on your most horrifying costume. Instead of something that would scare the living bejesus outta even grownups, giving them nightmares for weeks to come, why not go for something a smidge less scary and a tad more fun?

Keep in mind that some kids can’t eat regular candy because of allergies. If you want to be extremely accommodating to everyone, consider picking up some treats that are, for example, peanut-free or specifically designed for those with severe allergies.

And if you want to take a break from handing out candy on Halloween this year, CNN suggests that you turn off the lights and lower the volume of the TV. (You can also pretend you’re asleep or even hide in the closet if you hear any trick-or-treaters passing by. Who knows—that might be fun, too. Just watch out for the monsters hiding in the shadows.)

Some people thought that the parent was completely right to restrict access. Here’s what they had to say 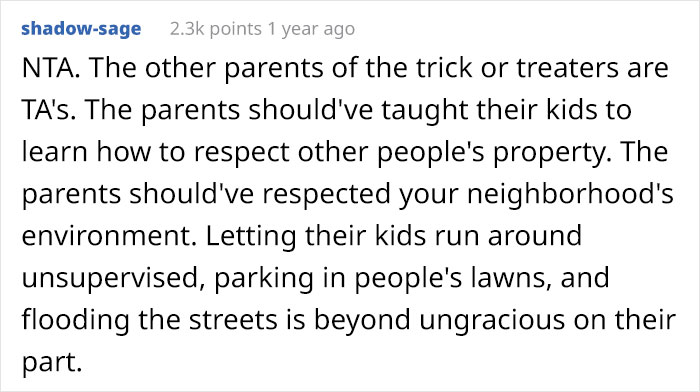 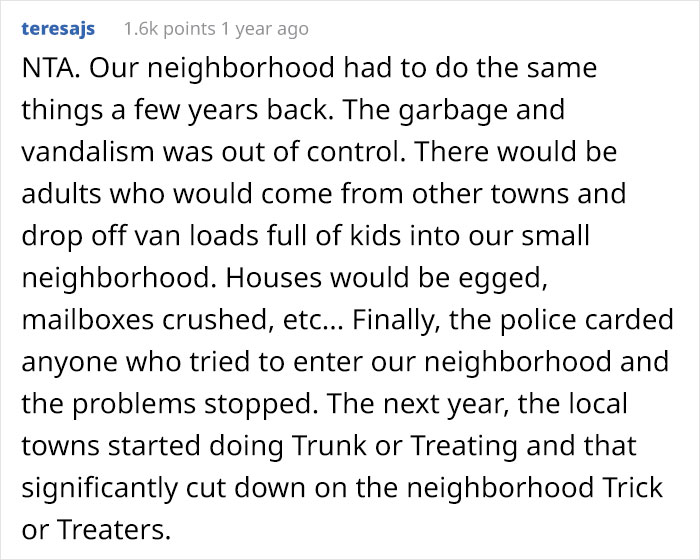 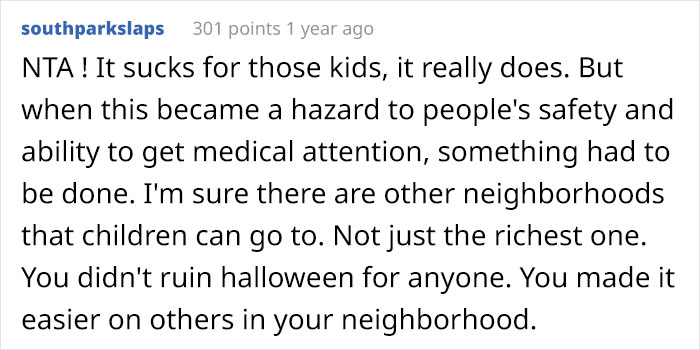 However, others thought that there were other, better ways to solve the issue 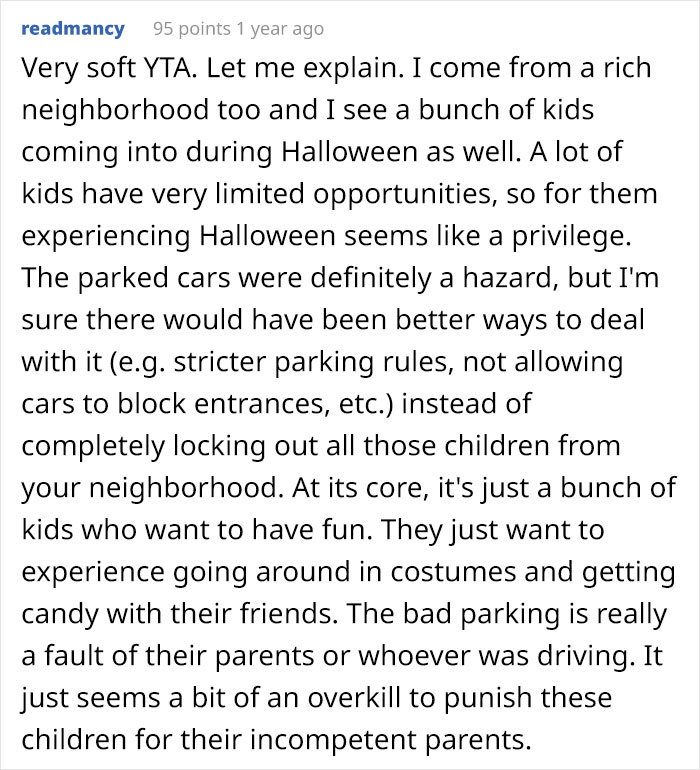 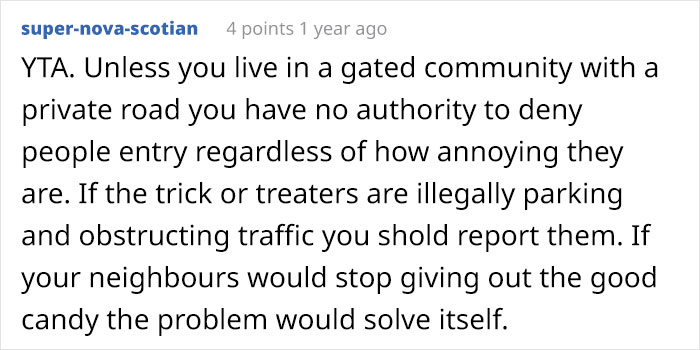