10-Year-Old Boy Gets Bullied For Dressing Up As Tony Stark For Halloween, Goes Viral After A Heartwarming Comeback

Here are some obvious truths that we wish didn’t need repeating. Words really do hurt. Bullying is never acceptable. And last but not least… making fun of someone’s Halloween costume is simply unacceptable!

Proud mom of four and supportive parent Jill Stahl Struckman from Missouri shared the story about how her son, 10-year-old Evan, became a victim of bullying because of the costume he wore for his school’s Halloween party. Evan decided to come dressed as genius, billionaire, and philanthropist Tony Stark, aka Iron Man (and personally one of my favorite superheroes of all time). However, some meanies on the bus made fun of him and brought him to tears.

However, things eventually turned out well and the story had a wholesome, happy ending. Scroll down to read what happened in mom Jill’s own words. The posts immediately went viral and brought out the very best in the internet, with many folks sending Evan their love and support.

Most of us know who Tony Stark, aka superhero Iron Man is. Genius, billionaire, philanthropist—he’s hard not to love 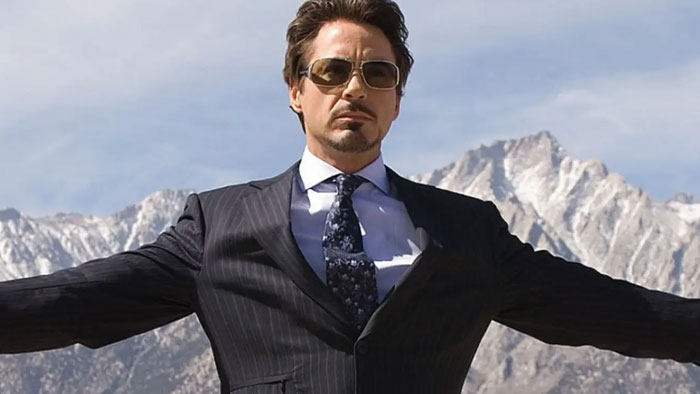 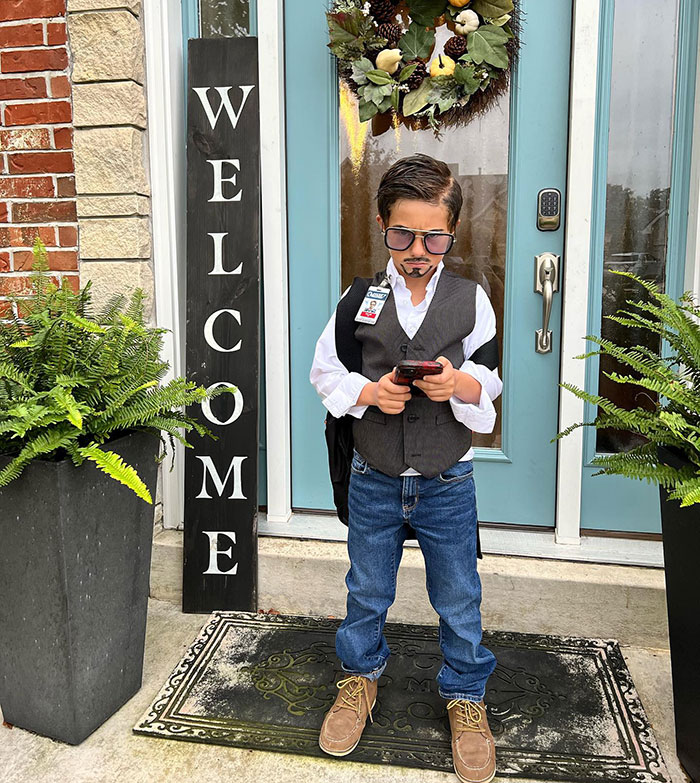 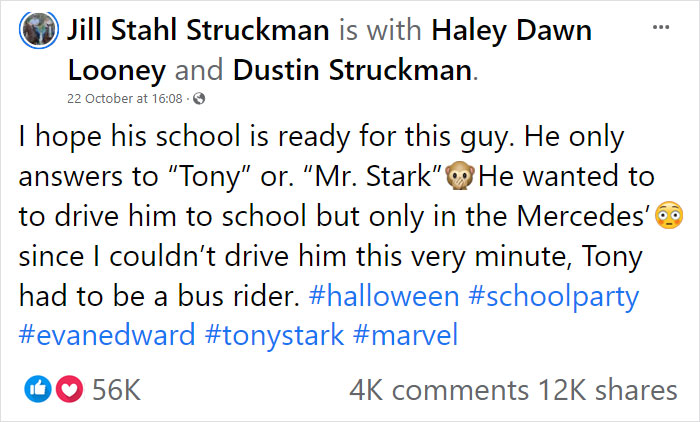 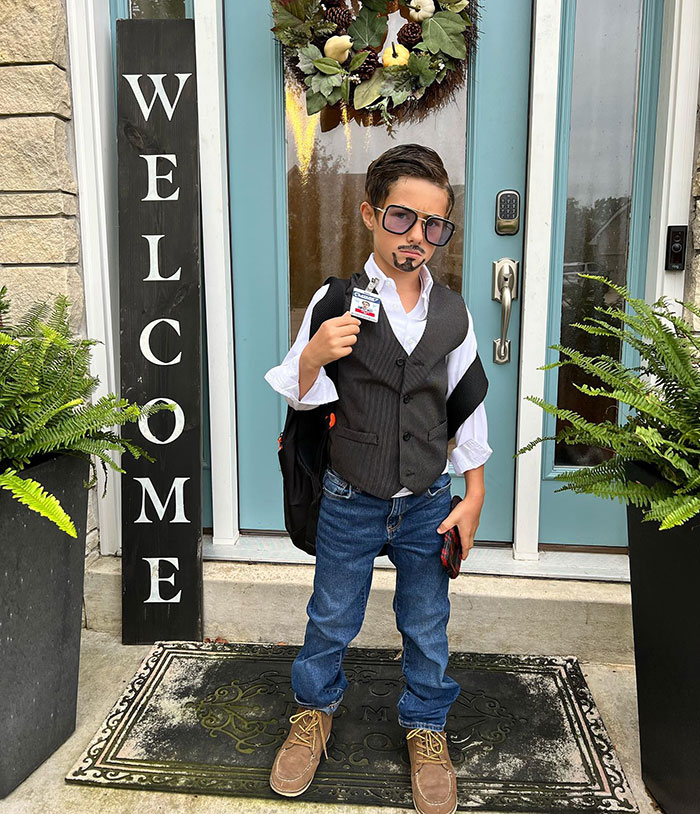 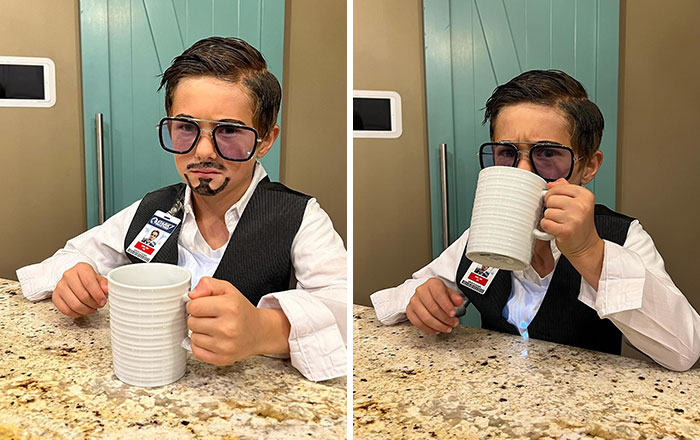 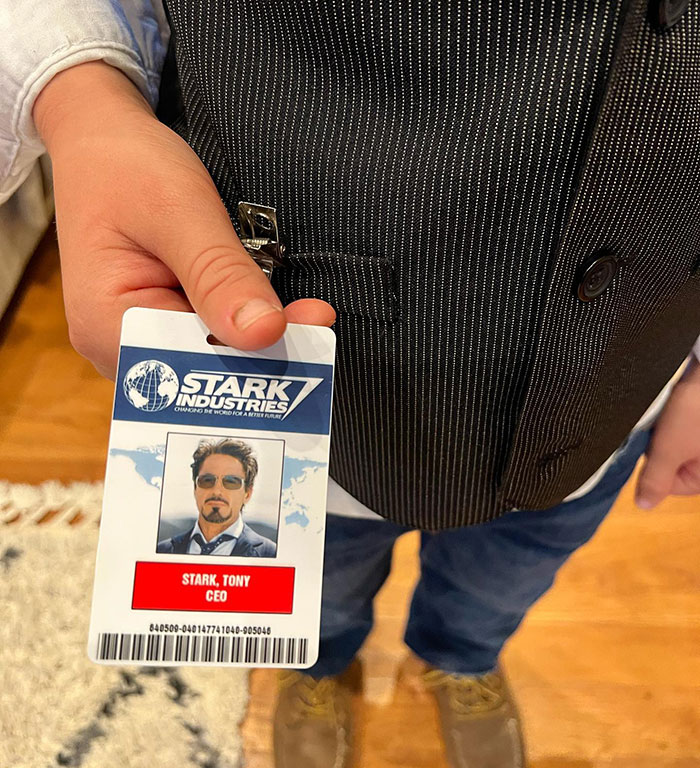 We think that Evan looks just like Tony. Don’t you agree? 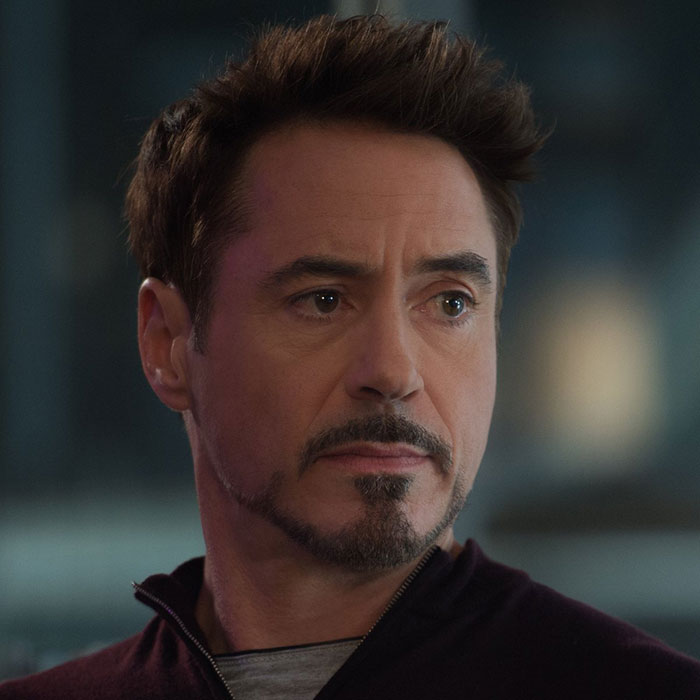 Unfortunately, things took an unexpected turn when Evan got on the bus 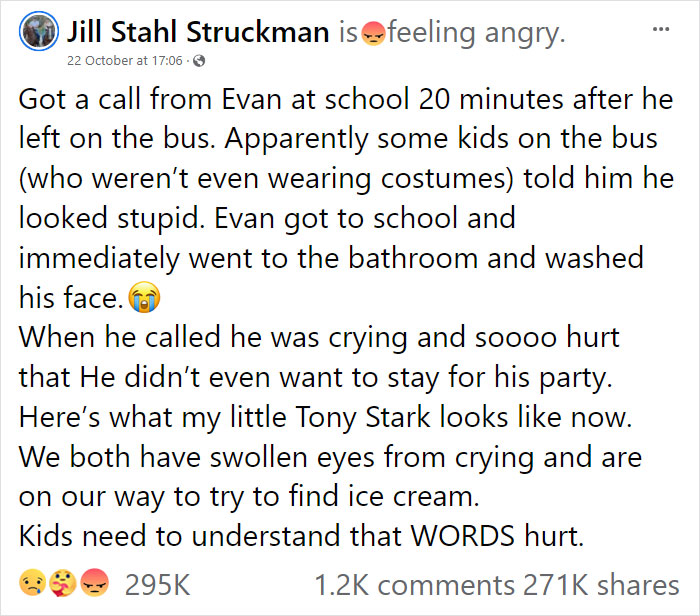 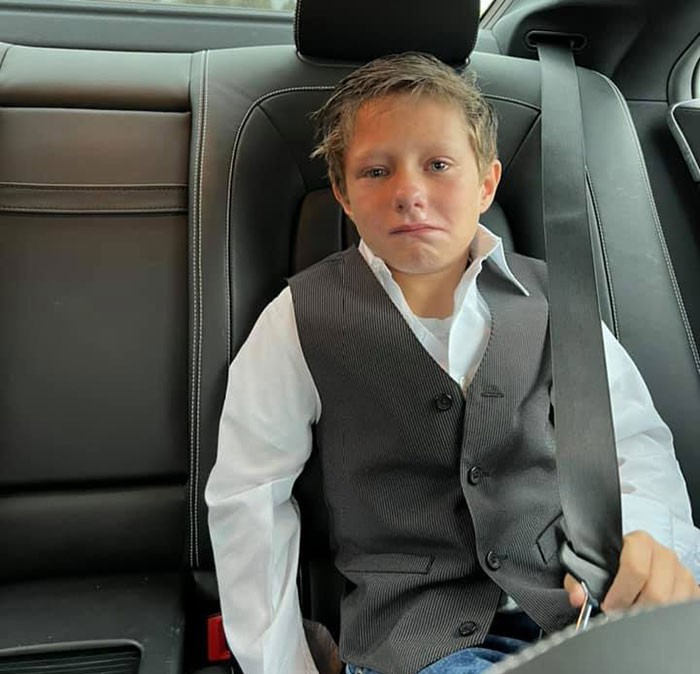 Thankfully, supportive mom Jill helped sort everything out and Evan’s costume was back on track 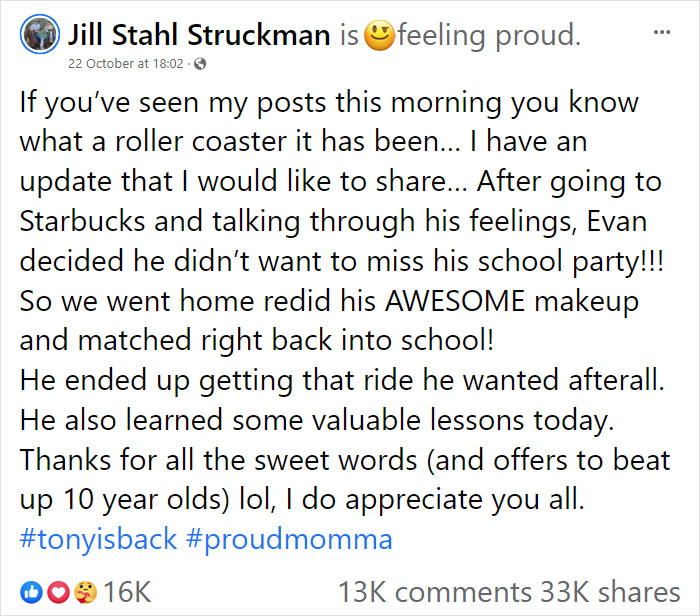 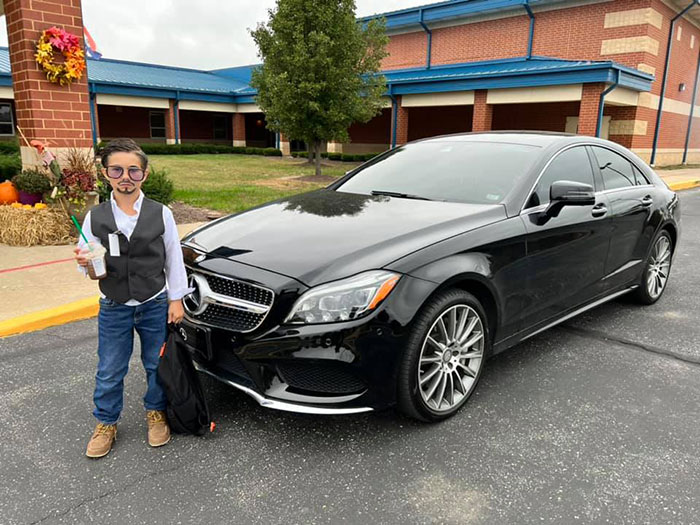 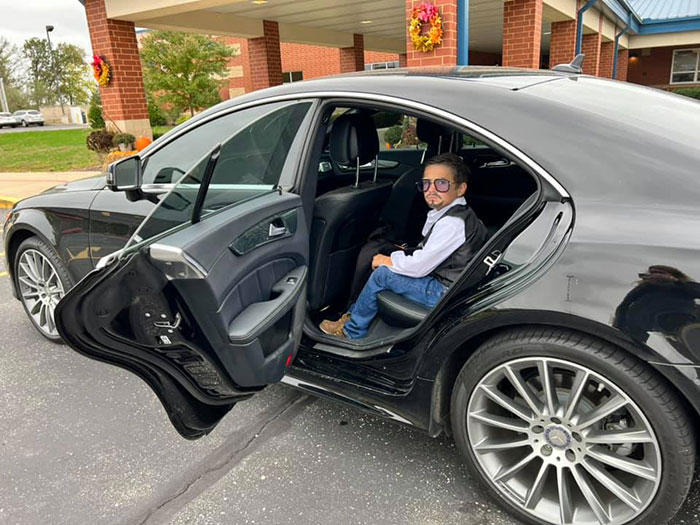 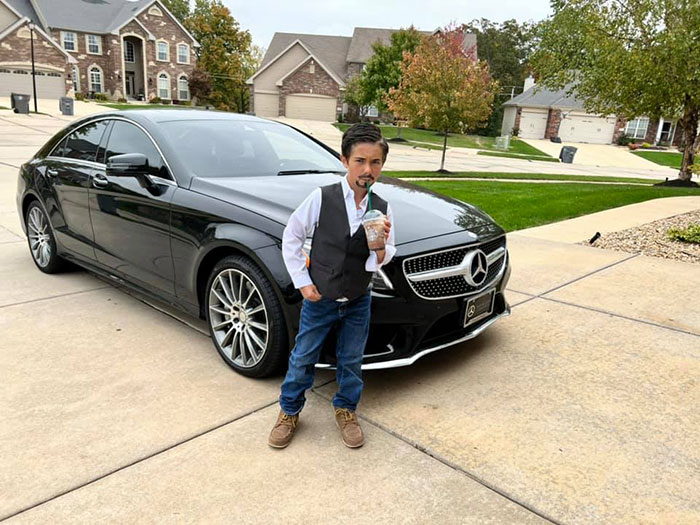 The response from the internet has, frankly, been utterly amazing 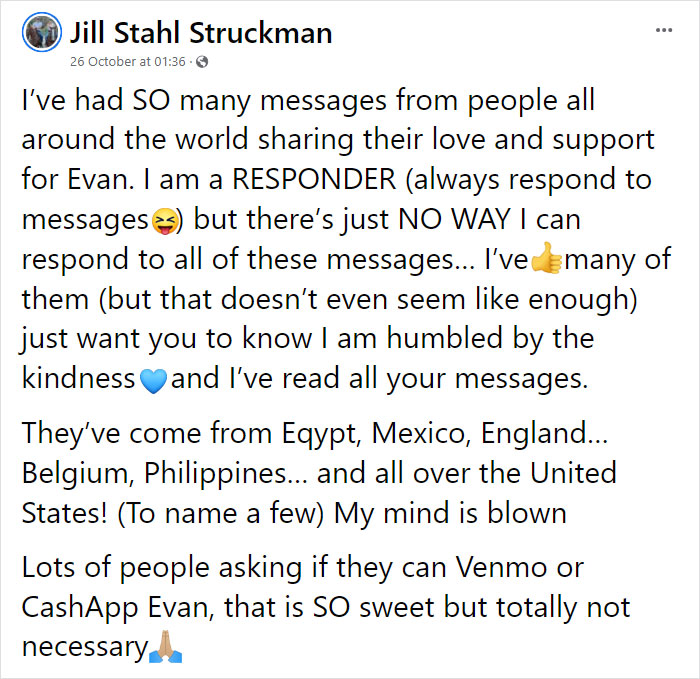 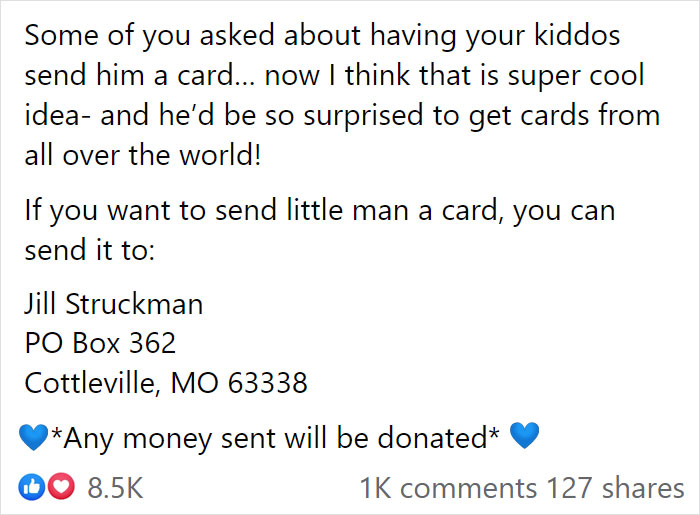 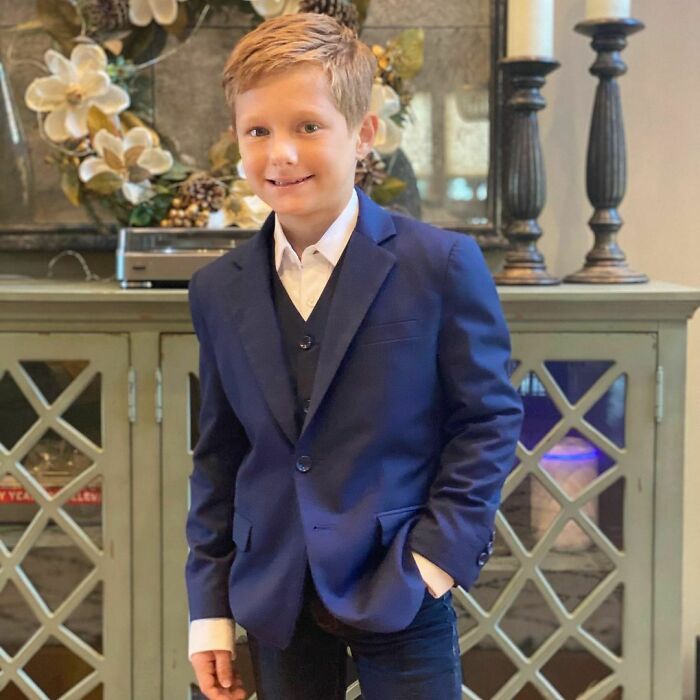 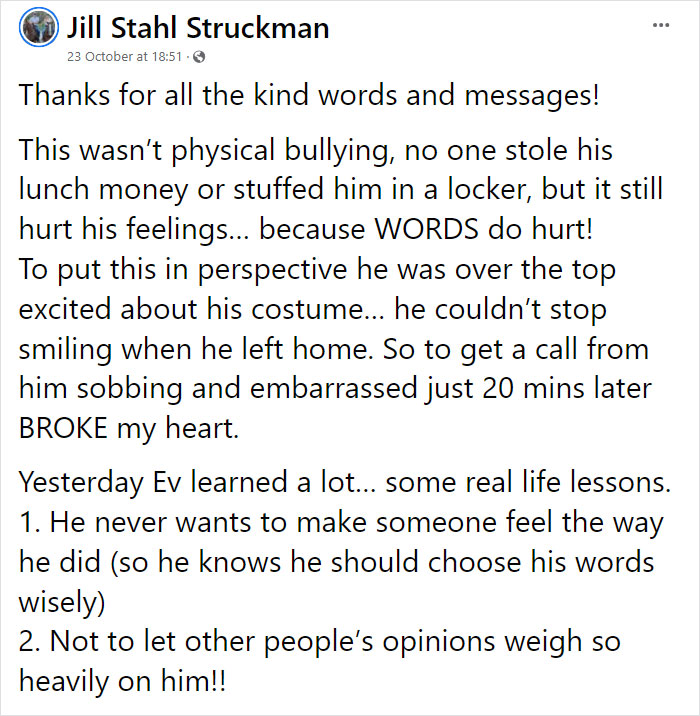 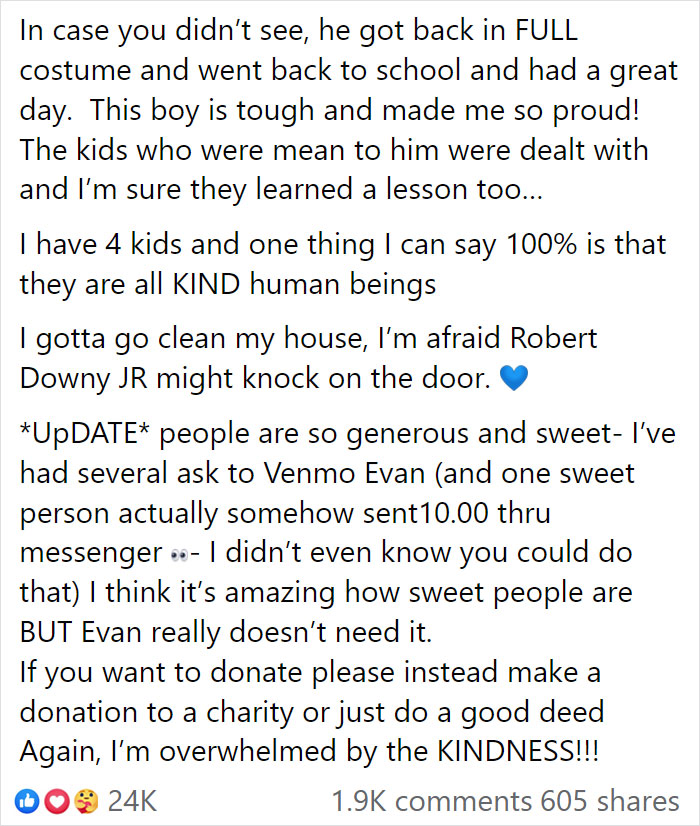 Mom Jill shared a very fun fact about Evan. He was so in his character that he’d only answer to ‘Tony’ or ‘Mr. Stark.’ We think that he’d give any actor a run for their money with that level of dedication.

Unfortunately, things turned sour when the 10-year-old got on the school bus. After being called names and having his awesome costume criticized by his peers, Evan went to the school bathroom and washed off Stark’s rad goatee. In fact, he was so upset he didn’t want to go to the Halloween party anymore. However, Jill showed just how kind, supportive, and caring she really was and managed to salvage the situation.

After a long heart-to-heart at a local cafe, the mom convinced her son to go to the school party. Jill helped redo his makeup and drove him to school in her car. It only makes sense that Tony Stark rides around in the best-looking cars. It’s part of his character, like his smarts and his beard.

The response to Jill’s Facebook posts has been utterly incredible. She’s had messages of support from all over the globe. Quite a few people were also considering sending Evan some financial support, but mom Jill pointed out that it’s not necessary. However, if you do want to send him a card, here is their address:

Evan also learned some important lessons for the future about how important it is that we pick and choose our words carefully because we never know who we might accidentally hurt with them. He also learned to be tougher and not care about other people’s opinions so much (a skill that I’ve yet to master). 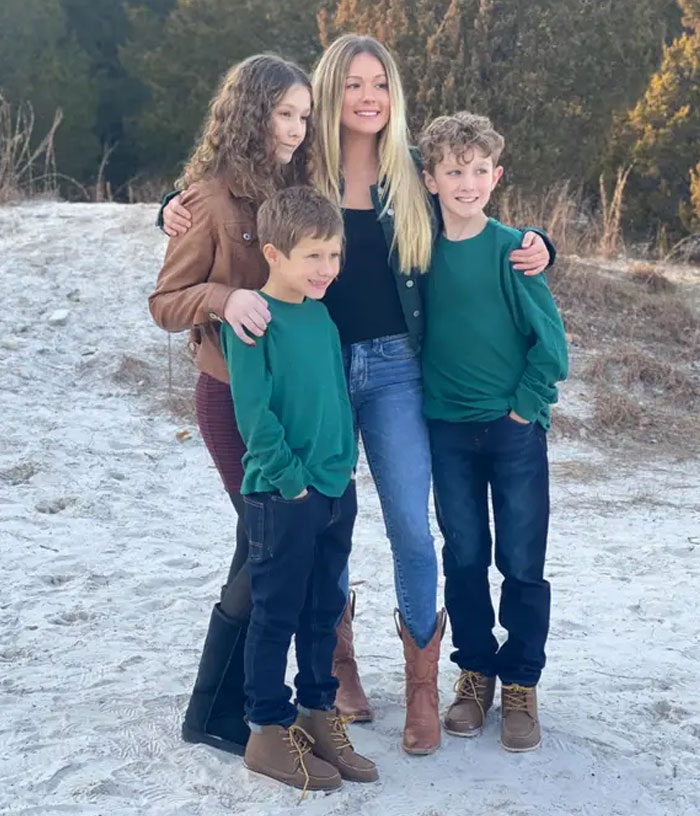 Jill told Fox that Evan is a kid “who always put himself out there” and even wears a business suit or a tuxedo every picture day at school.

“Every year, I’m worried all day that he’s going to get picked on. And he just usually doesn’t care. He gets looks and whatever, but for the most part, it’s positive. It’s just never an issue,” the mom told Fox.

According to Jill, the kids on the bus told her son, ‘You look stupid,’ ‘Everyone is going to think you look stupid,’ and that everyone was supposedly going to make fun of him. At the cafe, Evan admitted that he thought the costume “looked awesome.”

“I said, ‘Well, you did look awesome. You did look awesome, you know you looked awesome. So you’re letting the words of just a few people, you’re letting that define you?’” Jill shared what she told her son. With the 10-year-old inspired, the mom-son duo rushed back home, redid his makeup, and jetted back to school. Even ended up having a great day, meanwhile, his mom feels a tad overwhelmed by the number of messages she’s been receiving from everyone.

“It would have been easier for him to come home. But I really felt like if he doesn’t get back in there, then he’s not going to be the kid who puts himself out there anymore. This is going to change him. He’s not going to wear the tuxedo or the business suit on picture day. This is going to change him, because he, at that point, he’s let what others think of him define him. He’s just brave. I’m proud of him for going back.”

Bored Panda spoke about bullying earlier with Kidscape, a UK-based charity. According to Lauren Seager-Smith, the CEO of Kidscape, bullying can happen for a variety of reasons.

“Bullying is never acceptable,” she said that kids may be bullied for their family situation, their names, wearing glasses, being overweight, or pretty much anything else.

“Never underestimate the impact of bullying, understand what your child needs to feel safe and if the bullying is in school—make sure you let the school know the impact of the situation,” Lauren said.

“You may also want to seek out opportunities to build your child’s confidence and assertiveness skills so they can feel proud of who they are.”