Boss Vanishes For 8 Weeks Saying He Has Covid, Employee Finds Out The Truth And Throws A Party To Reveal Where He Actually Was

Recent times have been full of uncertainty and extreme distress. No one has felt safe or comfortable health and work-wise. And the only positive thing to come of this situation is that people have managed to unite and lend a helping hand to each other. A lot of people have been affected by the pandemic one way or another. As everything slowed down, people became more understanding and worried about each other.

Like it or not, most of our time is spent at work. So it becomes natural for people to become friends or at least great acquaintances with people they work with. Even if this is not the case, during the pandemic, a lot of people learned to care for each other and warn one another if anything went wrong. Reddit user @GranetBlanco decided to share the story of how their boss decided to use Covid-19 as an excuse to justify his 8-week absence at work. 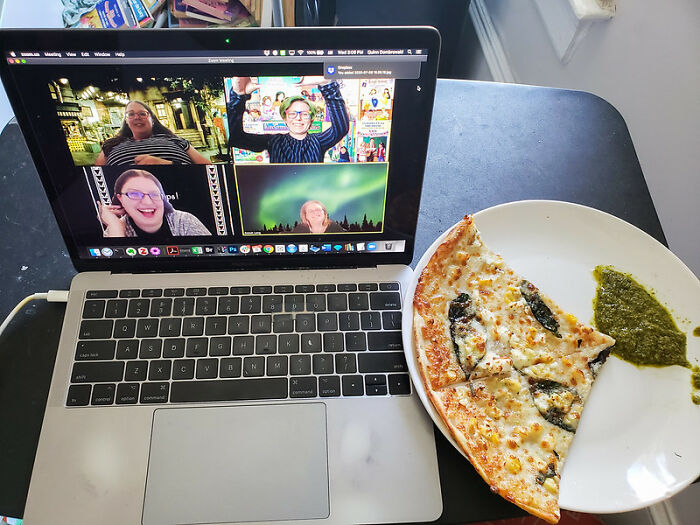 The user started their story by saying that in the middle of the pandemic, their boss disappeared without an explanation. Even though the times were rough, the team managed to work without him at first. But as time went by, the narrator and their coworkers started to worry, thinking that something serious may have happened to their boss. 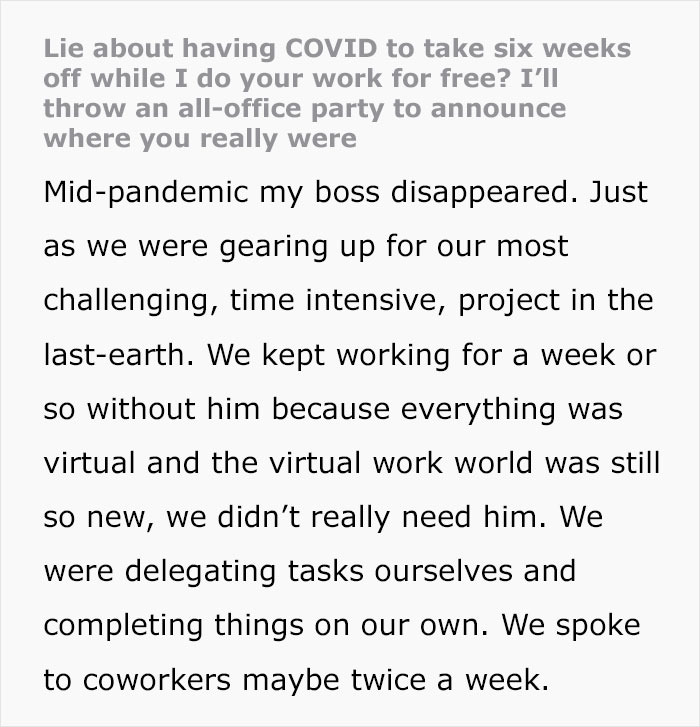 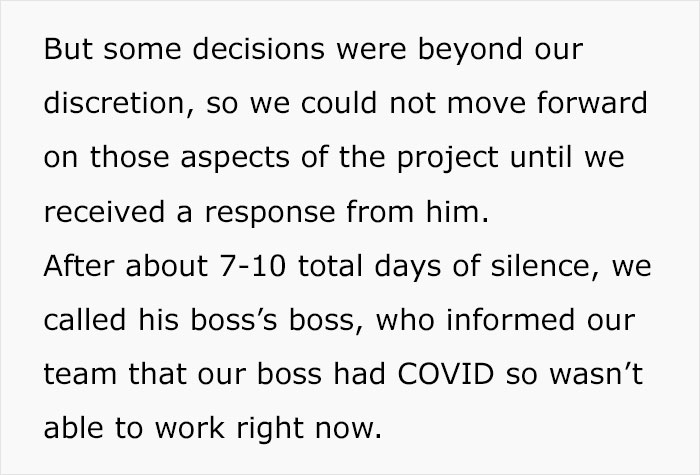 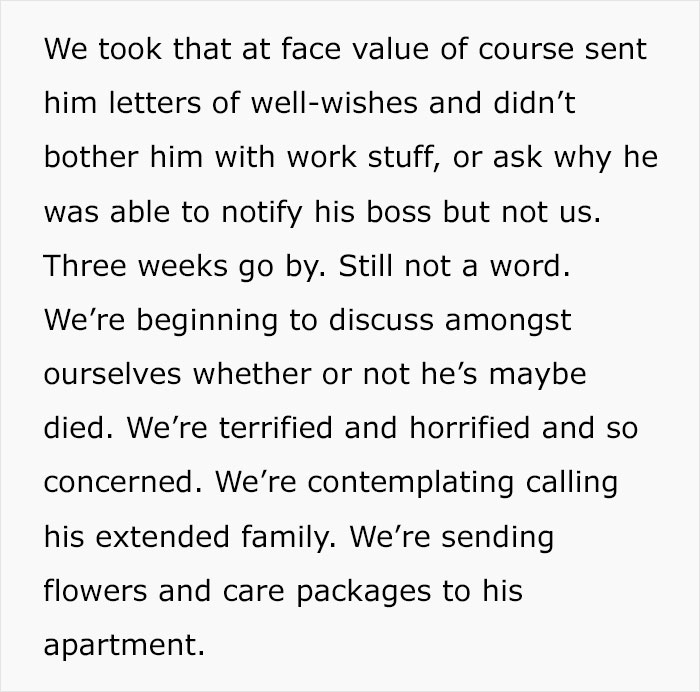 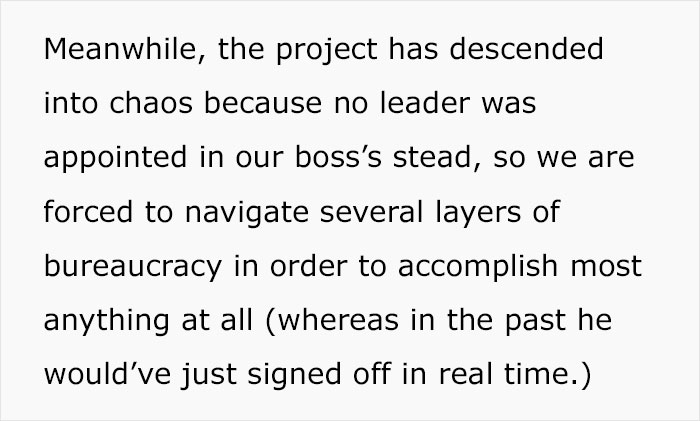 Once the team was not able to keep up with their work because some things “were beyond their discretion,” they decided to call some of the company’s authorities to find out what happened. This is when they all found out that the boss had caught the virus and was now sick. The colleagues immediately contacted the boss and left him some wishes to get well soon. 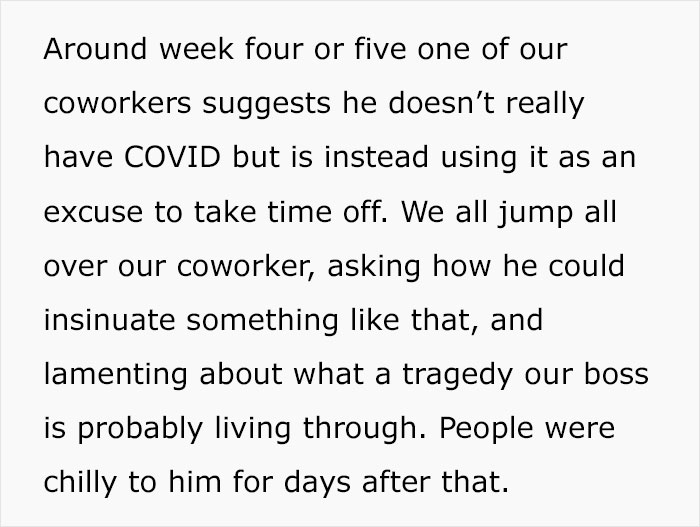 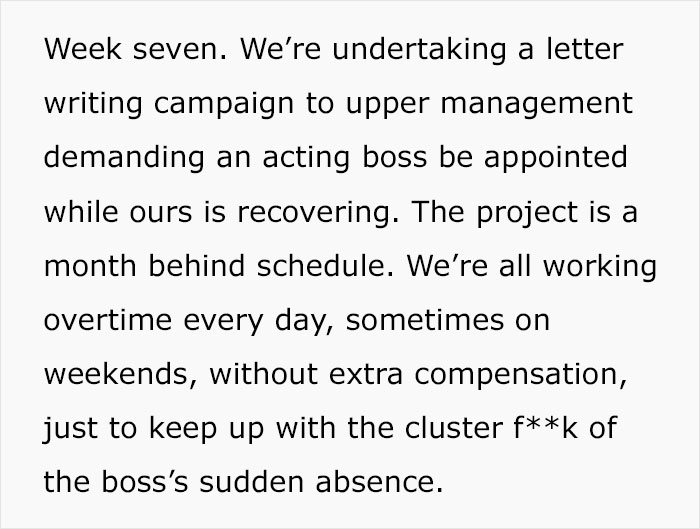 The narrator revealed that they were suspicious of the boss, who didn’t seem to look like someone who had been sick for the past 8 weeks 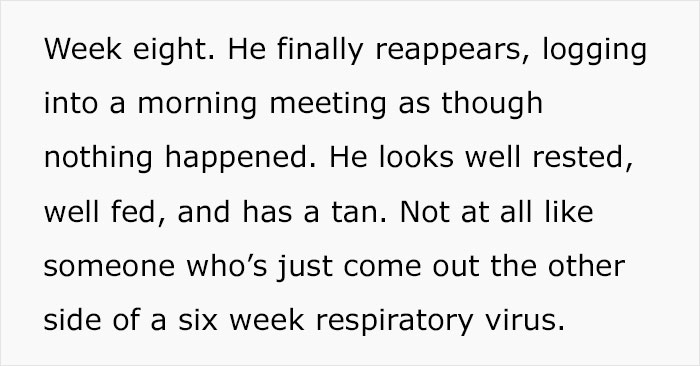 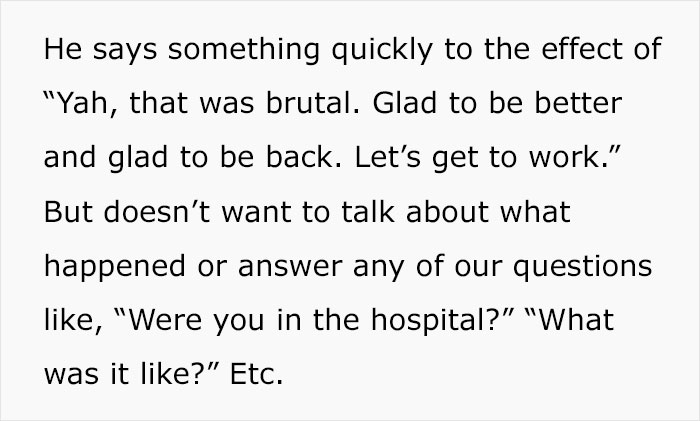 After 3 weeks, the boss still didn’t show up, causing everyone to start speculating about his possible death. Being good colleagues, the team kept reaching out to their boss’s family and sending care packages. At this point, their project turned into disarray and someone even commented that maybe their boss wasn’t sick at all, but had just decided to take a break. This caused a backlash against this coworker. 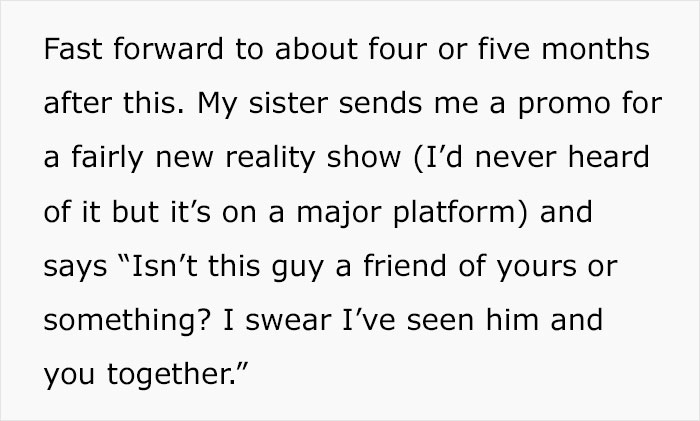 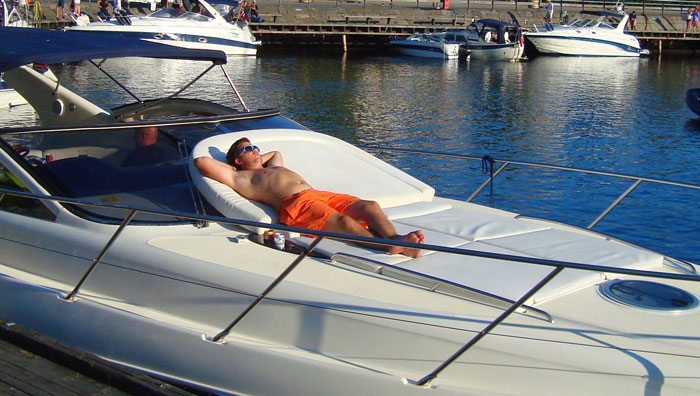 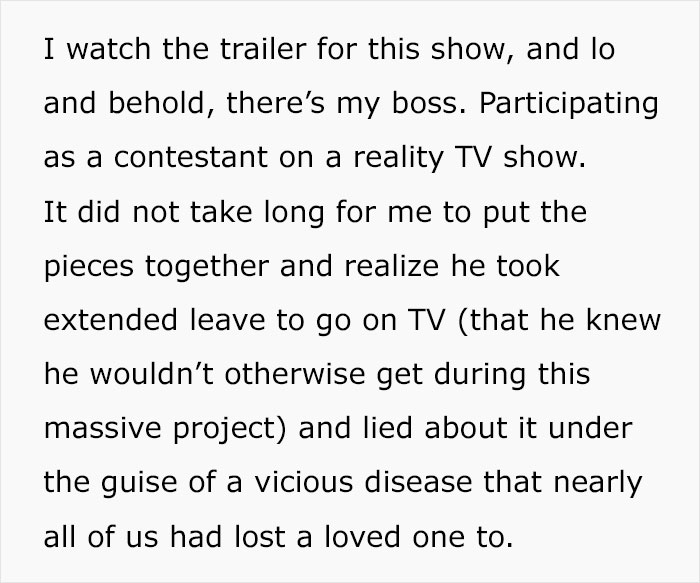 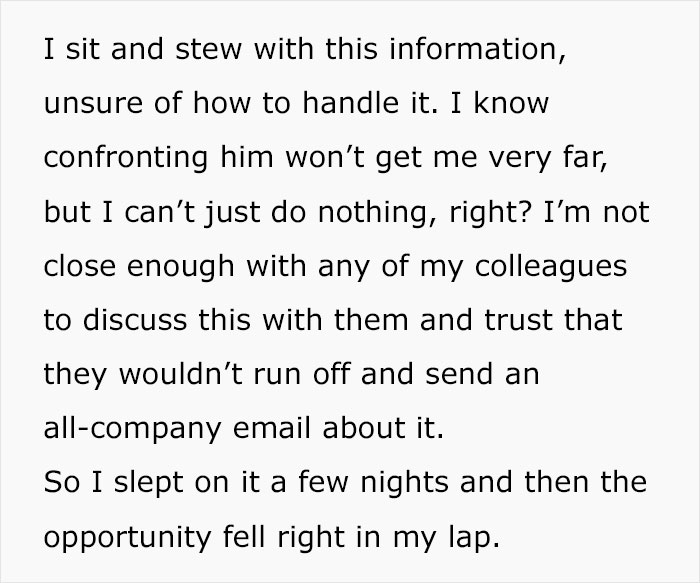 The employee knew they couldn’t leave this situation hanging, so they came up with an elaborate plan to break the news to the other employees 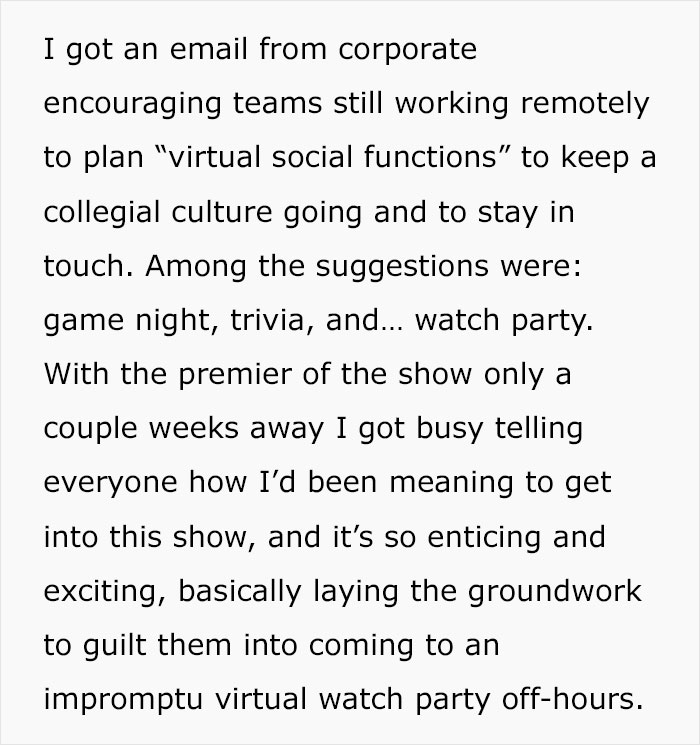 Finally, after 8 weeks of being gone, the boss showed up and continued with his work. What surprised the narrator and their colleagues was that the boss didn’t comment on the situation and didn’t give any details about his illness. Besides this, he didn’t look like someone who had just suffered from a very dangerous virus, but rather looked like someone who just got back from vacation. 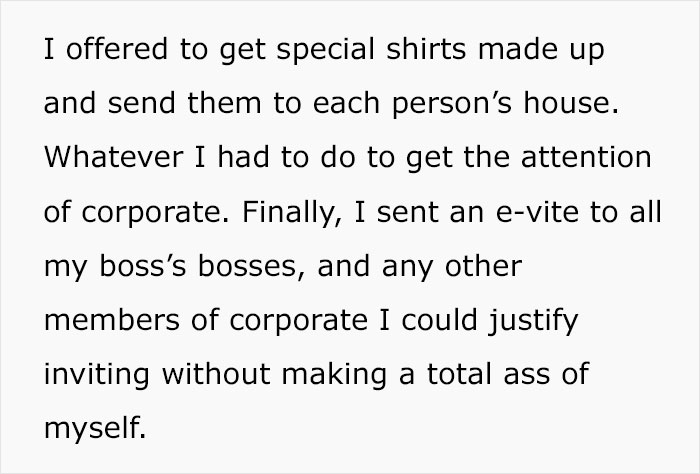 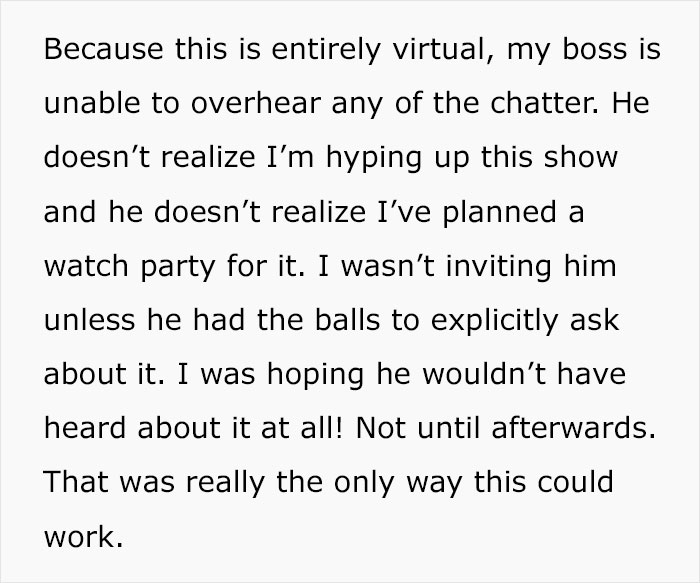 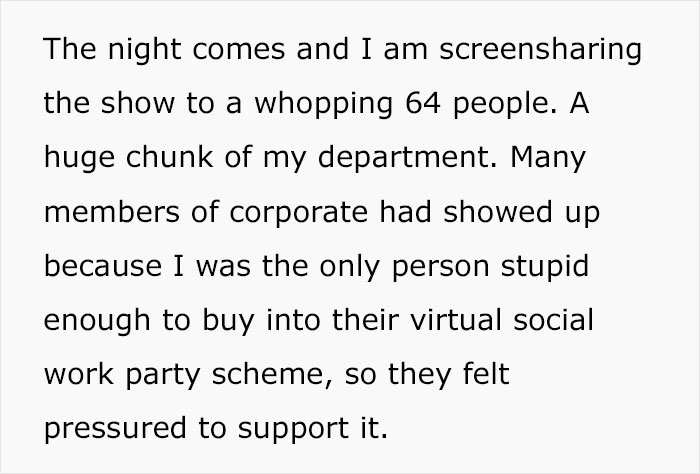 The important twist of the story happens 4 or 5 months later when the user says that their sister saw a promo for a new reality TV show. The promo presented the narrator’s boss as one of the contestants. Suddenly, the user realized where their boss had been all this time. 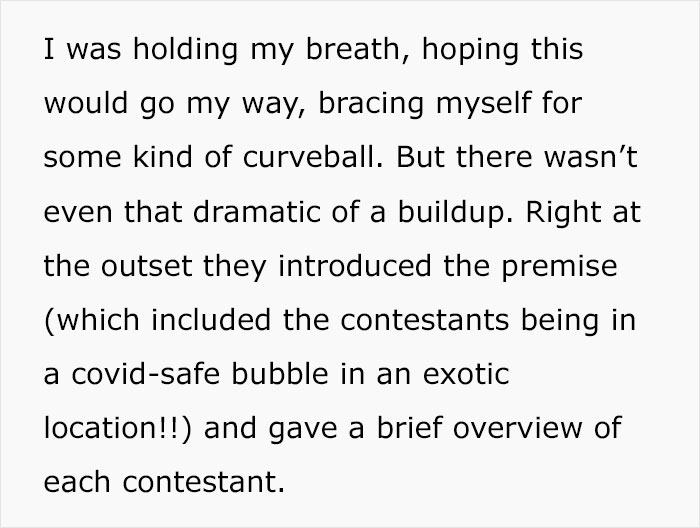 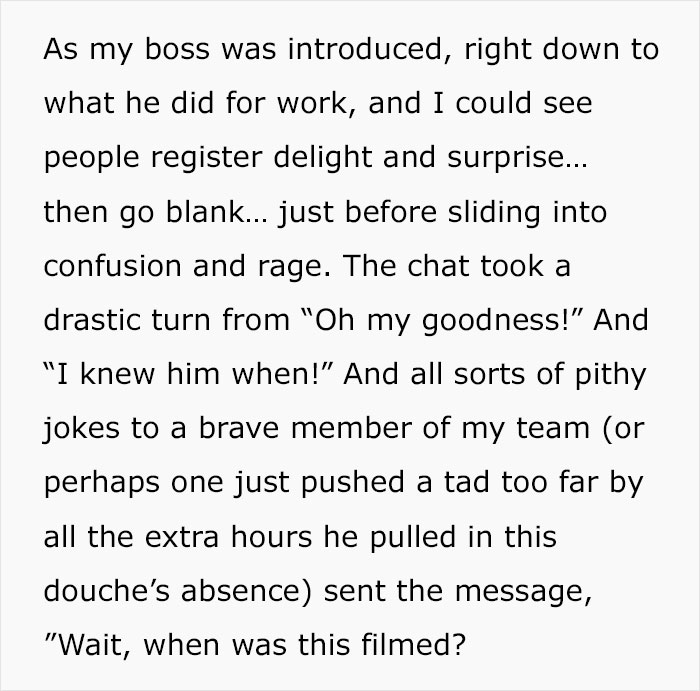 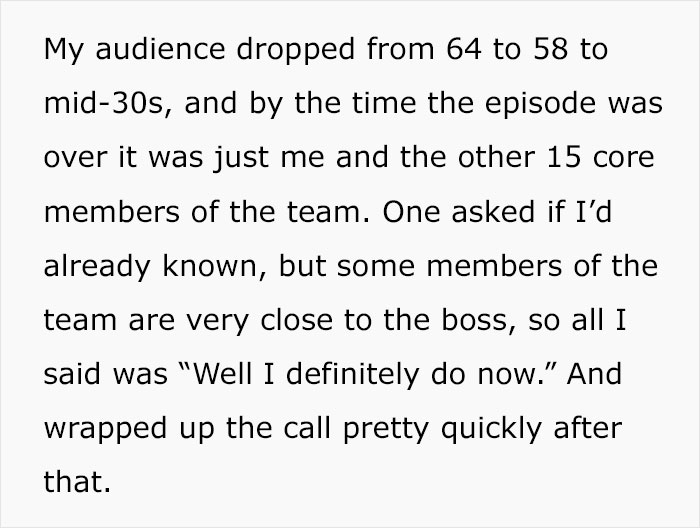 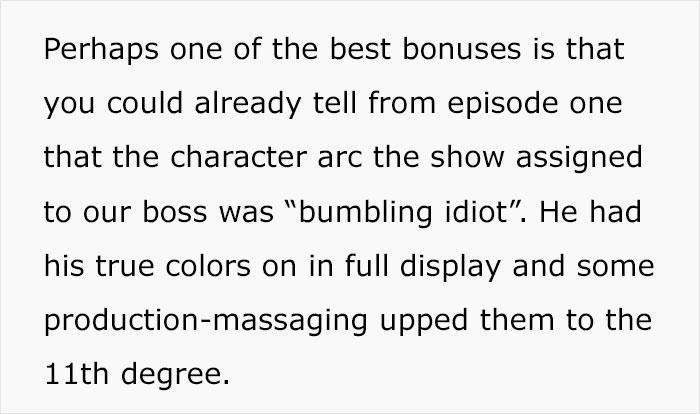 The employee couldn’t let this go so easily, so they decided to use the opportunity to host a watch party for all the colleagues and this way show everyone what their boss was doing at the time of his absence at work. The user finished his story stating that the boss got fired and people in the office are still speculating whether the user did all of this knowing the situation.

What is your opinion about this story? Leave your thoughts in the comments down below! 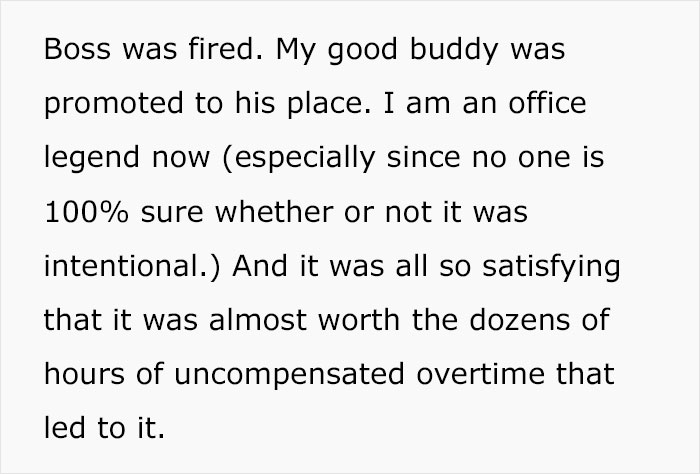