“I’ve Always Been The ‘Fat Sister’:” Woman Loses A Lot Of Weight Before Sister’s Wedding, Bride Freaks Out

If there’s a wedding coming up, you know that everyone in a family will be on edge. Little things like the color of cupcake holders can leave the bride in full-blown breakdown mode.

But this time, the trigger that led to a family drama powered by wedding planning, aka when everything goes against the plan, turned out to be the sister who… lost some weight.

“I 28F used to be quite overweight, over the last year or so I have made many changes in my life and have successfully lost almost 100lbs,” wrote the author on r/AITA. The woman said she’s “always been the fat sister,” and “this is the first time in our lives that I’m smaller than her.”

As you can suspect, this didn’t go well with the author’s sister, the bride to be, who was less than happy with such a transformation. Scroll down through the whole story below, and be sure to share if you really think the author was wrong to lose weight for her sis’ big day.

A woman has recently shared a story of how her sister, a bride-to-be, accused her of losing weight and trying to upstage her on her wedding day 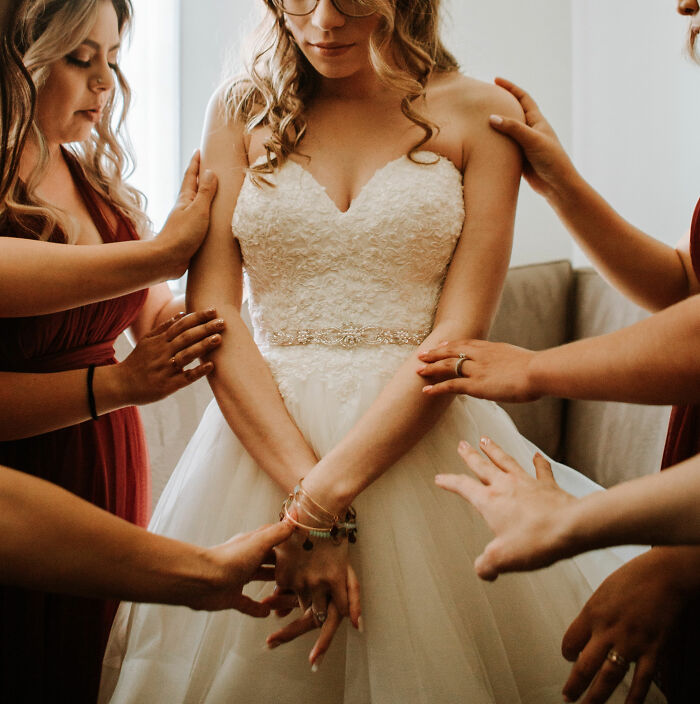 If there’s a day in life you choose to have all eyes set just on you, it would be your big wedding day. In most of our life journeys, we may never take up the role of the absolute center of attention as kids, jobs, partners, problems and whatnot take the stage. But what if a bride feels like she doesn’t get the attention she deserves? What if she feels like another person has stolen the attention away? 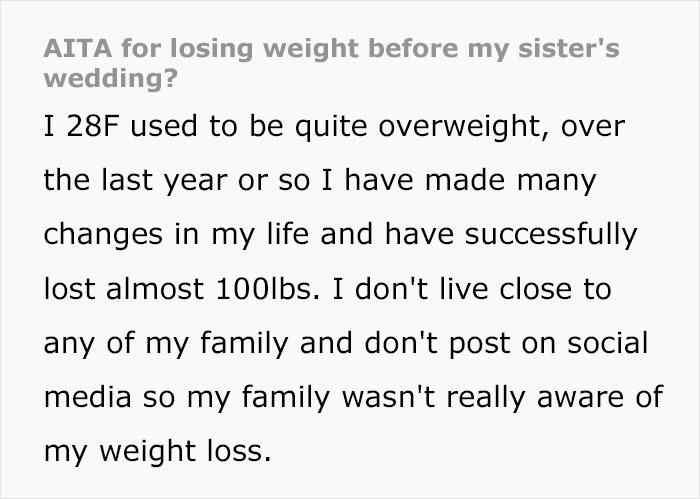 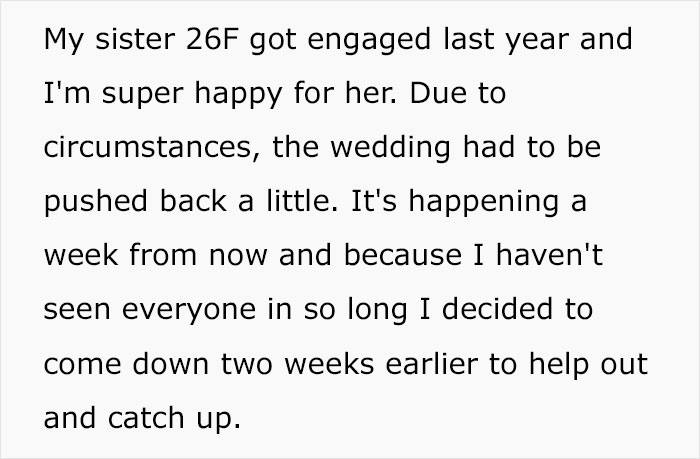 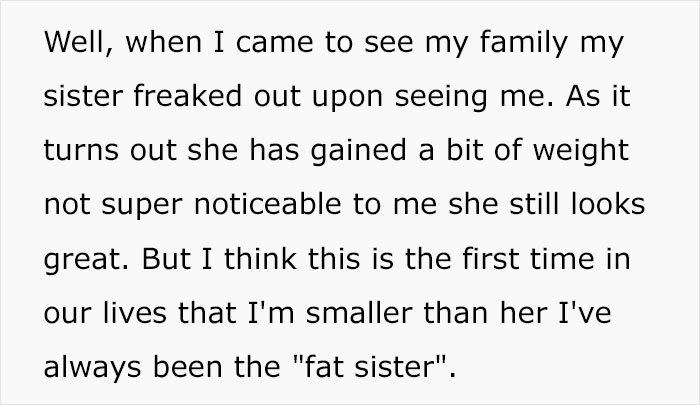 In fact, this happens more often than you’d think. Although it’s hard to decide on each event specifically, we at least know that brides do feel upstaged for whatever reasons. We previously covered a story about a woman who realized she’d overdressed for a cocktail-themed wedding and got accused of upstaging. We also wrote about the incident when a bride got upset with the groom’s teen cousin who was going to wear a traditional Indian outfit for fear it would upstage her.

On the other hand, “to believe you’re justified in feeling ‘upstaged,’ you also have to believe two things: that there is such a thing as a stage, and that you are entitled to all of it,” argues Carolyn Hax, an advice columnist. “Please do whatever it takes not to believe either of these things,” she added.

It’s true that blaming people for getting on with their lives, for whatever reasons, whether it’s weight loss or wanting to wear a particular piece of clothing, is not the frame of mind you want to find yourself in. Especially not on the big day, when spirits should be higher than your insecurities. 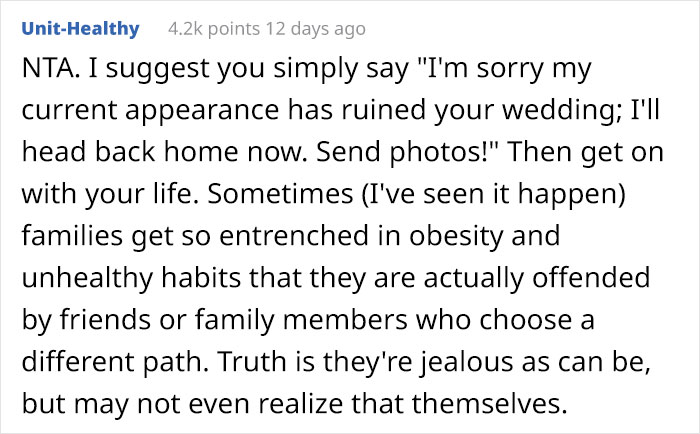 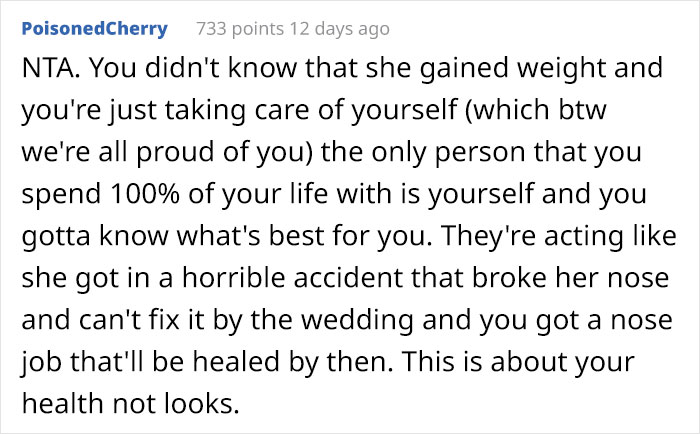 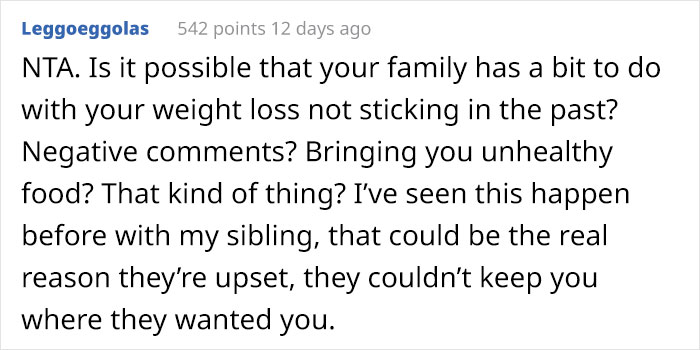 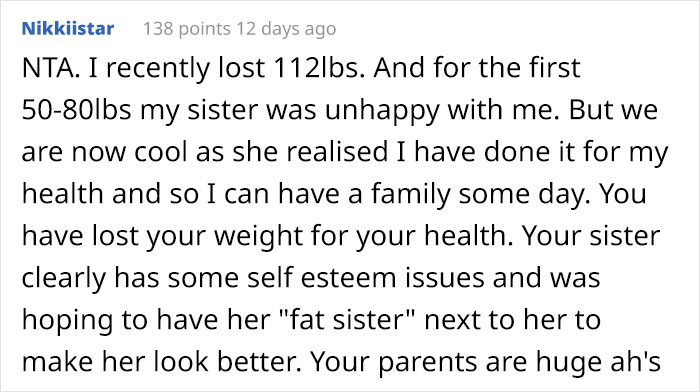